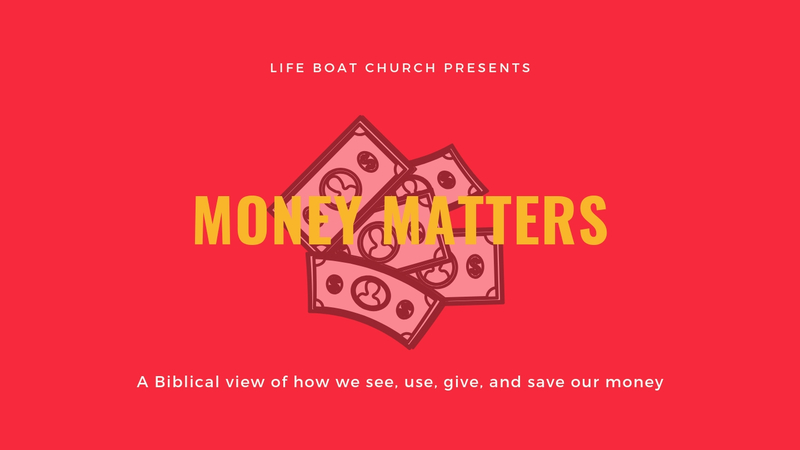 Ah yes, the dreaded "T" word... Tithing is one of the most sensitive topics in churches because of the many times the donations of the people have been misused by those in power. This week, we dive into the topic of tithing and wrestle through some of the issues associated with it.

If where we use our money shows what we deem important (Matt 6:21) it makes sense to give God the first portion.

On the first day of each week, you should each put aside a portion of the money you have earned. Don’t wait until I get there and then try to collect it all at once. ~ 1 Corinthians 16:2

The first money principle we see in Scripture is God desires our first.

What is a tithe? It literally means a tenth.

This stone that I have set up as a pillar will be God’s house, and of all that you give me I will give you a tenth. ~ Genesis 28:22

There is something intrinsic that is calling their offering to be first and needs to be at least a tenth.

I never would have been able to tithe the first million dollars I ever made if I had not tithed my first salary, which was $1.50 per week. ~ John Rockefeller

If you’re still living in the world of addition and subtraction, the tithe is difficult to give because it feels like you’re subtracting 10 percent from your income. But once you graduate to multiplication, you realize that God can do more with 90 percent than you can do with 100 percent. ~ Mark Batterson

The tithe should go to your local church, which provides the same function as the Old testament storehouse. You see the storehouse comes up a lot in Proverbs, Nehemiah, and other places in the Old testament. Since Israel was largely an agricultural economy, a good percentage of the tithe was given as crops. Those crops went to the storehouse, which was used to feed the poor, widows, orphans and the priests. ~Dave Ramsey

A priest descended from Aaron is to accompany the Levites when they receive the tithes, and the Levites are to bring a tenth of the tithes up to the house of our God, to the storerooms of the treasury. ~ Nehemiah 10:38

In the New Testament

Does a tithe still apply to us in light of the New Testament?

You should have practiced the latter, without neglecting the former. ~ Matthew 23:23

The affirmation of the tithe and the command to obey it appears throughout both the Old  and New Testaments, and it always refers to a tenth of your increase. So farmers gave a tenth of their crops, hunters gave aa tenth of their meat, and so on. ~ Dave Ramsey

“Will a mere mortal rob God? Yet you rob me. But you ask, ‘How are we robbing you?’ In tithes and offerings. You are under a curse—your whole nation—because you are robbing me. Bring the whole tithe into the storehouse, that there may be food in my house. Test me in this,” says the Lord Almighty, “and see is I will not throw open the floodgates of heaven and pour out so much blessing that there will not be room enough to  store it. ~ Malachi 3:8-10

Hangout Warming up to the topic

Hear Listen to God through Scripture

Huddle Make it personal and pray together

Ten percent sounds like an easy number to come up with, but many people never actually think through what their full tithe should be. Take a minute to complete this worksheet so you will know how to begin honouring God by returning the first 10 percent of your income to him.

Who Do You Serve?